If you watched the 91st Academy Awards, you felt it the moment it happened. Green Book winning the Best Picture Oscar deflated the beautiful night of progressive wins. Black Panther winners felt justified and exactly the right choice, Roma's awards were cathartic artistic wins for small stories and a people maliciously and baselessly assaulted daily in this country, and Spike Lee's screenplay victory was both a fantastic make good as well as right for the moment, but Green Book...

Look, Green Book is not a bad film. It is not the ideal, progressive vehicle to discuss race relations in the 50s, but still it has value. At times it is easy to get caught up in the world of hard right conservatism vs hard left progressiveness, but that is not dichotomy is not the world writ large.

Calling these statues awards is ridiculous. Art isn't about competition or besting your peers. Somewhere around the time the event started being telecast, the Academy Awards went from recognition of outstanding work to crowning a champion. That's absurd. The very award before the finale Guillermo Del Toro expressed this very sentiment when he said all the films recognized at the ceremony will be the same films when the night concluded. So a weighted voting system attributed "victories" to some and "losses" to others, way too much stock is put in that. Time and the collective response to art tells us which film is Citizen Kane and which film is How Green Was My Valley or which film is Driving Miss Daisy and which is Do the Right Thing.

But even in that dichotomous thinking comes the stench of misjudgment. Green Book may not be the actual best picture released this year, but it is not racist, garbage. A flawed person wrote it, liberties may have been taken with the truth (but welcome to all "true stories" told on film), and Peter Farrelly is at heart a goofball who has been completely inappropriate in the workplace and has a tendency to have the linguistic grace of a drive time radio personality.

Viewpoints on race evolve much more like Tony "The Lip" Vallelonga than people want to admit. Too use a literary hammer; just as some people need to learn from their own mistakes, all too often people only learn from personally discovering their own racism.

The information age has shown the brightest light imaginable on equality, racism, sexism, and xenophobia, but just because an idea exists doesn't mean people will immediately adopt it. Roma, Blackkklansman, and Black Panther are champions of culture and acceptance, but in a way so is Green Book. Pundits and cocktail party goers want to talk about the black vote, the latino vote, the female vote- there is no such thing. Different lives come with different experiences, beliefs, and vantage points.

Green Book's Dr. Shirley fits no generalizations, hasty or otherwise, about a black american. Neither does the actor who portrays him. Tony Lip lives amidst a den of hearty bigotry but he's not a hood-wearing troglodyte. Racism and racial experiences exist on a spectrum. 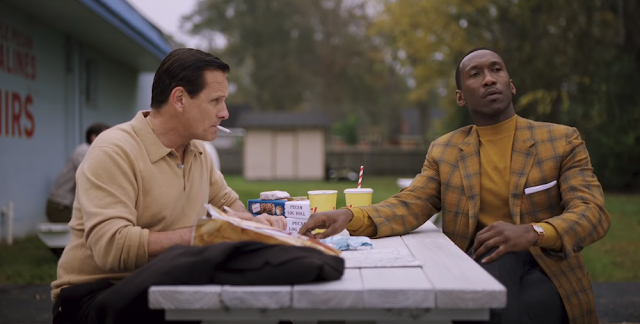 That is the take home from Green Book. Your racism is not only disgustingly unfounded, it is widely inaccurate. Populations are not culture, and cultures are not absolute. You and your neighbor live in the same town but you probably don't worship at the same church. It's likely one of you doesn't worship at all. Tony Lip isn't a representation of all white america and Shirley isn't a stand-in for all black america. That isn't possible. Behavioral shifts and changes in beliefs don't happen immediately. All of this was true in the 1950s and it still is true in the 2010s.

Tony Lip isn't the hero of Green Book, the hero is Dr. Shirley. Shirley walks the walk in the most dangerous of climates of his life. Tony -the audience surrogate- learns the world isn't cut and dry, left or right, black or white and it is on him to affect change. The Doctor learns racial views may move slow, but Tony is proof change is possible.

The cultural response is right. Green Book is not the film to champion the views and hopes of 2018. But there are still a great number of people out there who won't have their own visceral Tony Lip experience. So if Green Book inches them along to understand diversity doesn't mean standing in the same room as a person of color, but that person and their peers are each unique people, then it is has achieved at least one thing it set out to do.
I have some more thoughts but they might spoil the film. Let me know how off base you think I am. Jacob and I briefly discuss the 91st Academy Awards and Green Book in our recently episode.