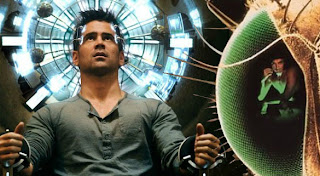 Total Recall is the latest Hollywood movie to get the reboot treatment and it is far from the last.   I'm personally not against remakes - the original film will always still exist (barring a worldwide cinematic armageddon or the film being made by George Lucas) and sometimes, in a small percentage of cases, the remake manages to improve on the original film.

We'll talk more about remakes in the next FWOAC episode (including our thoughts on the 2012 Recall), but, before recording, I wrote up a short list of what I think helps make a remake worthwhile.
Here you go Hollywood, you can thank me later...

This is actually quite common since a lot of remakes are of foreign-language films that require a change in location so Americans can understand what's going on *tongue-in-cheek*.    While most of the time, this change is purely superficial (see, the actually quite good Let Me In and Insomnia), sometimes the change in setting gives the film a completely different energy than the original.  Despite a lot of plot similarities to Infernal Affairs, The Departed's Boston criminal underworld is a completely different type of shady than the Hong Kong Triads.

Leaving foreign films aside, one of the best choices of the recent Fright Night remake was to change the locale from Anytown Suburbia, USA to a housing development just outside of Las Vegas: a city that would be very likely for a vampire to take up residence.  The strange landscape of a town surrounded entirely by desert gives the film an extra eerie air.

The Japanese samurai film is often compared to the American western, so it makes sense that when United Artists remade Akira Kursosawa's 1954 masterpiece The Seven Samurai, it took the form of the iconic western The Magnificent Seven.  That film is now rumored to be remade with an all-star cast, but it won't be the first time.  Magnificent had its own genre-bending with Roger Corman's low-budget (but cheesy fun) Battle Beyond The Stars.


RETURN TO THE SOURCE MATERIAL

When the Coen Brothers made True Grit in 2010, they made a point of repeating over-and-over that they weren't remaking the 1969 John Wayne western, but were adapting Charles Portis' original novel. The result was a Best Picture Academy Award nominee that abandoned a lot of the Wayne version's sentimentality.
Another successful remake that adopted this strategy was John Carpenter's The Thing which went to the source material (John W Campbell Jr.'s novella "Who Goes There") to bring back the concept of a shape-shifting creature that brings a tension and paranoia that's missing from 1951's The Thing from Another World.

This is an idea that I think has provided a lot of the best remakes.  If anything this is the #1 justification as to why the idea of remaking a film isn't entirely a bad one.  Remaking a dated or bad film can tell a story that didn't reach its full cinematic potential the first time around.  Updating the effects/politics/culture of a film can introduce the core ideas to a new audience that wouldn't give a cheesy movie the time of day.  Two great examples of this: Steven Soderbergh's Ocean's Eleven took a painfully dull Rat Pack vehicle and turned it into a great heist film that cemented George Clooney's standing as a movie star.   One of my favorite films ever is David Cronenberg's The Fly. The original Fly is a mostly-forgotten 50s B-movie where Vincent Price fights a man with a Fly head. 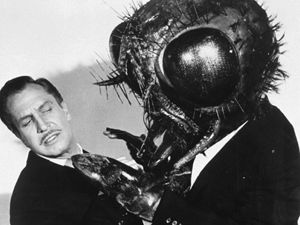 Cronenberg's film is filled with grisly body horror, great performances from Jeff Goldblum and Geena Davis, and is the best sci-fi horror film of all time.

This is a pretty short list, so feel free to leave your thoughts on what makes a good remake in the comments section.