Films that level you (and rebuild your love of cinema)

Quick, think of a film that absolutely leveled you on your first viewing. Picking one film from each of the last five decades I feel confident in saying popular opinion would come up with:
For very different reasons these films absolutely captivated audiences and inspired creative minds both inside and outside the film world. Still, these are the easy picks. Films that hit at the right time to rattle the entire culture. But what about films that either hit a small subset of cinema goers or fester overtime to become classics? The truth is film like all artistic mediums is subjective and what some find astonishing, others hold as deplorable (have a discussion with me about Aliens sometime and you'll understand).

Whether you are one of the few who connect with a new film, rediscover something you once cast off, or unearth a cherished work made decades before you were born; a film can pull the rug out from under you from virtually any direction. My most recent encounter with cinematic wonderment came with a viewing of Jacques Tati's 1967 classic, PlayTime.

Looking at the list above of zeitgeist grabbing films from the past fifty years, PlayTime seems like a zebra in a room full of horses. It's a comedy, foreign, not a single cast member is a star, and its run in the cinema was so bad it kept Tati in debt for years. But it does belong. Each of those films above require multiple viewings to absorb their layered brilliance that ultimately pushes them from enjoyable moving pictures to art, and PlayTime is that and much more.

For the uninitiated, PlayTime is the story of several characters who cross paths in a modernized version of Paris as it entered the modern, computerized age of the 1960s. The dialogue is of little consequence, the casting is unremarkable, the pacing is rather slow, but the execution and cinematography are unparalleled. A common slight on modern comedies are they're full of obvious gags and lack in film style. PlayTime is quite the opposite. It has so much style it is impossible to consume it all in a single viewing, the gags are both subtle and slapstick, and there is an undercurrent of commentary on the modern age that Apatow or McKay could never pull off without punching you in the face with it. 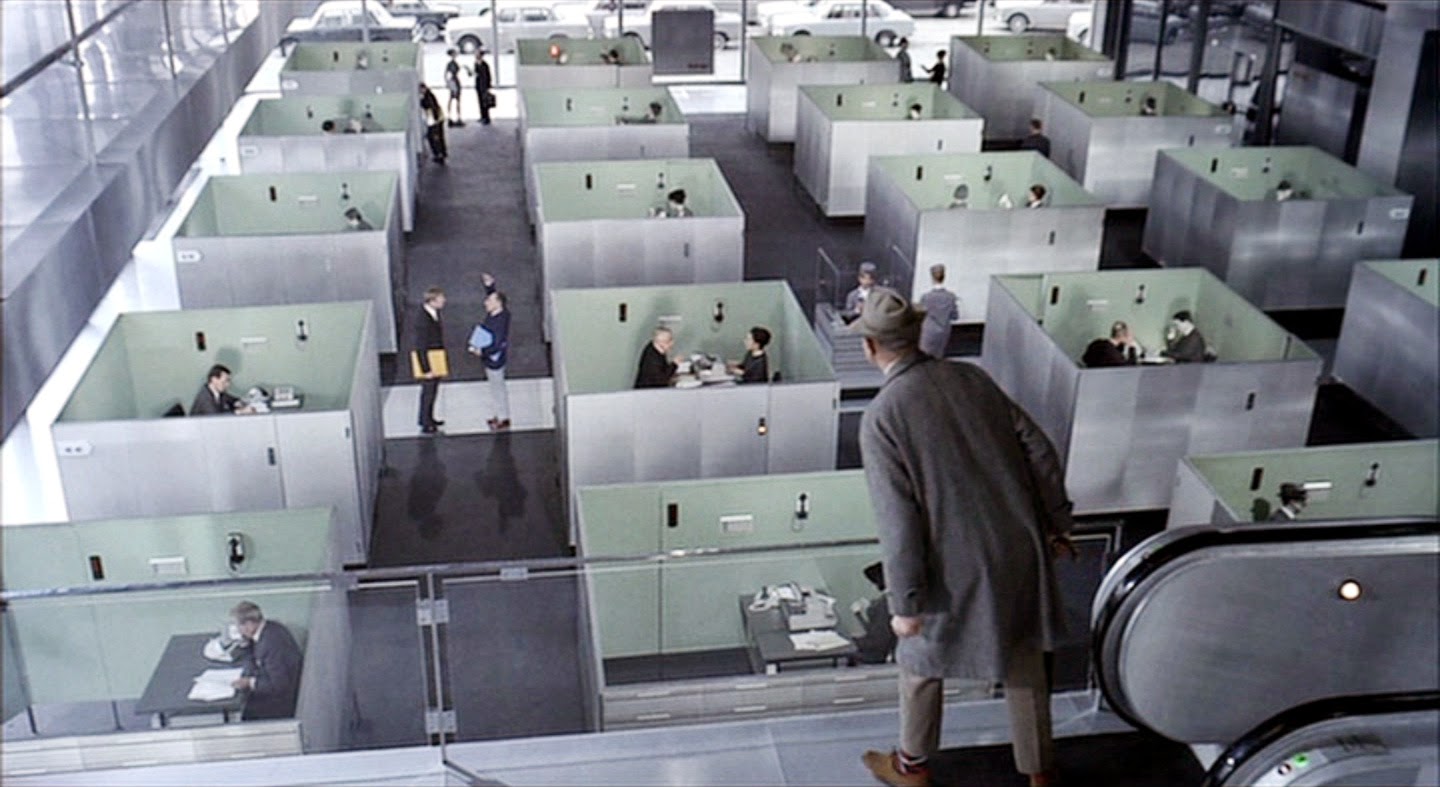 Of course, for the average impatient movie fan of today, might find PlayTime tobe the "boring." Which would be dreadful shame of a view to hold. Yes there are long, complicated scenes where nothing of importance happens, but those are the points when the audience needs to meditate on what is there and why witty repartee is absent. The journey of Tati's long running goof Mr. Hulot and tourist Barbara might be the audiences entre into PlayTime, but they are far from the center point. I mean the film took three years to film, Tati built a working city set known as Tativille, and each a backstory and film narative was written for each of the characters who take center stage at one point or another.

Finally sitting down and watching PlayTime re-energeizes my desire to mine the boundless hours of film came before 1996 (when I started caring about film). If a film such as PlayTime, which wasn't nominated for a single Oscar, can completely win me over in a single viewing than who knows what else is waiting for me.

Patrick Boberg is an avid film fan, a part time film director and co-founder of FWOAC. Follow him on Twitter @PatBoBomb.