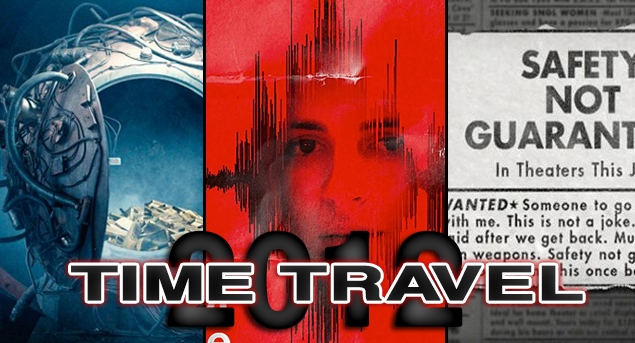 When it comes to storytelling devices it is hard to beat time travel. Traveling back in time to fix a mistake, kill a villian, stop a war, save someone dying, warn humanity, hide from someone... the intrigue heightening/cheating power of time travel is hard to resist. A perfect example of the utilization of time travel, but not center stage discussion of it, are three widely celebrated films from this year; Looper, Sound of my Voice, and Safety Not Guaranteed.

If you ever take a screenwriting course one of the first things you'll learn is about character development and backstory. Who are your characters and why do we care about them? Time-travel films almost always deal with characters traveling through time to confront some aspect of their personal history, either literally or figuratively. Does a character have to physically travel through time and space to be a time traveler? To be a dime story philosopher, one could argue that any film where a character is overly nostalgic, stigmatized or stunted by their past could be considered a time travel film. 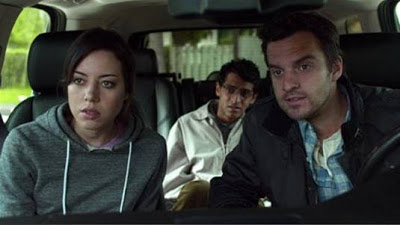 In Safety Not Guaranteed, three characters set out to write a covert, sensationalistic article on a man who is recruiting a partner to time travel with. The subplot of the film is the two main characters are haunted by their past and the skeptic journalist writing the article took the assignment to secretly drop in on a girl from his past. The audience spends the majority of the film wondering what the story is with the crackpot time traveler,  not questioning if he has actually built a working time machine. Without discussing the quality of the film, Safety Not Guaranteed is not a science fiction film stewing over the implications of moving through space and time, it is an indie dramedy about people living their lives through different lenses;
Going on an actual time travel journey is not important to the plot of the film and is for the most part simply a plot device to stage a "Man versus Self" story. 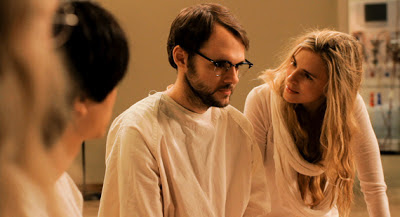 Where Safety is all preamble to time traveling, Sound of my Voice is entirely post-passage through time. The antagonist (if there is one) of the film, Maggie, portrays herself as a woman from the future who has somehow traveled back in time hoping to prepare select people for the troubling future. The main protagonists of the film want to expose her as a cult leader who is taking advantage of suggestible people. While time travel definitely plays a role in the film, the plot is much more about belief, skepticism, community, and loneliness. The audience never learns anything about the particulars of Maggie's time travel and never finds a solid reason for how or why she travels through time. There are some "answers" to those questions but discussing them would spoil the film.

Sound of my Voice takes a much different slant than most time travel films, it takes place in the past and none of the characters are looking to travel back in time, they are preparing for the future. Maggie does answer several questions about the future, but never any questions about her means of time travel or if she could somehow do it again or send one of her followers back in time. On the other side, no one in the film asks to travel into the future, her followers simply want to learn from her and meet the future with her. While the film ends with a possible answer to the mystery's of Maggie, the paradoxes and specifics of time travel are never revealed; however, we might get those answers in a sequel. Again, another film where the characters are implicitly impacted by time travel, only one is directly effected by it. 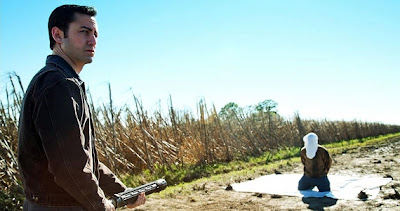 Finally Looper. If there is one basic through-line from the time traveling films of 2012 its that none get into the science or mechanics of time travel, Safety and Voice are rife with skeptics about the possibility of time travel, in Looper time travel is simply a fact. The time travel technology is shown but never dissected, similar to the dream machinery from Inception. If Safety finds the characters in the planning stages for time travel, Looper is the mess that occurs when you succeed and actually attempt to change the past.

On FWOAC 14 Jacob and I reviewed Looper and went deep with our opinions on the paradoxes of the time travel of the film, but as a plot device, time travel acts excellent instigator for Rian Johnson's film. The issues of time and space may have been better handled in 12 Monkeys or Bill and Ted's Excellent Adventure, but Looper brings the audience on a very thrilling ride of one man's selfish and destructive life in time travel. This film is science fiction and from the very start it sets its rules: causality and circular logic, something the other films never need to deal with. While Looper may have received the widest release of these three films, and was hands-down the most exciting film of the group, its use time travel is more than plot device, the central question is about physically traveling through time to change the future. Time travel is more central than Safety or Voice, but the psychological effects of the future and the past bare greatly on the changing motivations of the films main characters. The implications of current actions and their baring on the future playout more in Looper than in any other film. Maggie has no interest in changing the past to fix the future in Voice, the Guaranteed journalist crew are interested in exposing a nutjob, not his impossible time travel. The motivations and actions of Bruce Willis and Joseph Gordon-Levitt change several times over throughout Looper.

Safety Not Guaranteed, Sound of My Voice, and Looper all execute their themes and integrate time travel to varying degrees of success, but their efforts are commendable. In the end time travel is like all other flavors of film; do you like it to be loose and unexplained (Sound of My Voice, Time Travelers Wife), completely scientific and laid out (Primer, Source Code, Star Trek IV: The Voyage Home) or simply fact that (Bill and Ted's Excellent Adventure, The Terminator)? However you prefer it, I venture that these three films utilize this day-dream technology in memorable ways that stand out as excellent archetypes for time travel in screenwriting.