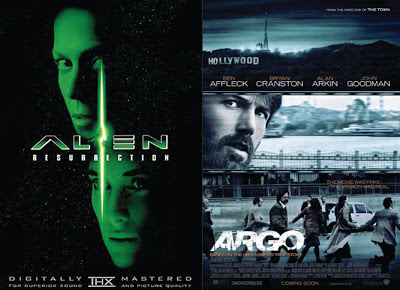 Filmcast Without a Cause is about to cause an international incident with its review of Argo. But as always, the show starts with the news. Redbox turns 10 years old, the A/V Club names the best films of the 90s, Jurassic Park is proven impossible, and David Fincher is "Kickstarting" his next film. And for those who have been playing along, we're closing out our FWOAC Franchise Flashback with Alien Resurrection. So if you're child of the 90s, a fan of Ben Affleck or enjoy films that nearly kill beloved franchises you've come to the right place.

Next Week: Franchise Flashback
Jacob and Pat have officially ended the Alien Franchise Flashback and that means we're caught up to Prometheus. In case you aren't in the know, Ridley Scott's latest recently came out on DVD/Bluray and Jacob and Pat will give it the Flashback treatment. By now hopefully you know this isn't a true review, but a chance to talk filmographys. You're thoughts and comments are needed! Watch the film this week and send us an email, a tweet or leave a comment on this post!