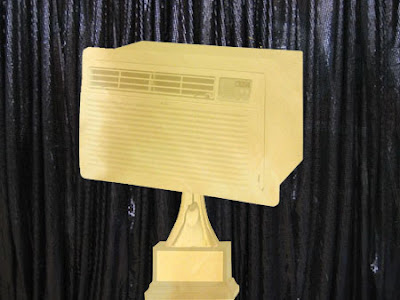 With school back in session and temperatures starting to drop it is time to embrace the obvious... summer is almost over. But before we get too down on everyone's favorite time of year passing us by, FWOAC would like to give it a goodbye kiss by celebrating our favorite films of the summer months with, The Golden ACs. These awards marry two of our favorite things about summer: summer films and air conditioned movie theaters. We gave you readers the opportunity to submit your ideas for summer-film themed categories and we took your comments and feedback to build this list for first ever Golden AC Awards:
Based on the traditional fare of summer flicks these categories cover your popcorn films, your artsy flicks, the gut-busters, the sequels & prequels,  the storytelling, the best good and evil characters (not necessarily from the same film) and our personally picks for best films of the summer. While other award shows may choose best actor, actress, director, adaptation, original work and overall film, FWOAC recognizes that the summer movie season stands out and should have its own tailor-made awards. While we may call ourselves critics, these awards are meant to celebrate the best, not denigrate the worst. So give us your picks!

We want to hear from you! The Film-Goers! Jacob and Pat may run the show and give their opinions, but there is plenty of room for your voice to be heard as well. This is not a calendar-year film awards, to qualify a film must have been released between May 1st and Labor Day.

So now that you know the categories, leave a comment, send us an email (filmcastwoac@gmail.com) or tweet at us (@FilmcastWOAC). The Golden AC winners will be announced on the August 29th episode of Filmcast Without a Cause.
Best of Film Awards Summer Films The Golden ACs