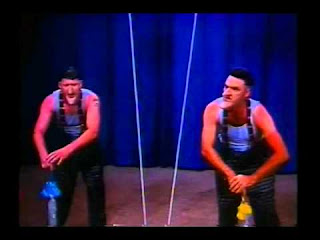 While revisiting "Weird" Al Yankovic's seminal 1989 masterpiece UHF, I immediately became fixated on a seconds-long interstitial section near the end of the film.  During this scene, two strange looking characters with long noses and chins are making a sound best typed as "aw-oo-aw-oo-ee-oo" during the climactic station fundraiser.

Research followed and it was soon learned that the characters are performance artists The Kipper Kids.  Also, this one second scene was part of a much longer deleted scene and musical number:

The section in the above video that is actually in the film is 0:22 - 0:27.
The YouTube user who posted this clip also has other Kipper Kids videos.  This is not a recommendation.

Further research revealed that one of the Kipper Kids has been married to Bette Midler since 1984.

This has been Weekend Randomness.