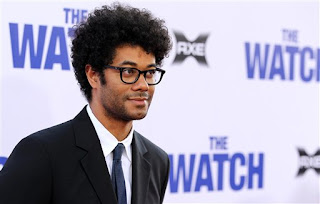 While it was neither a commercial or critical success, this weekend’s The Watch may end up being remembered for one thing: it was the introduction of mainstream American audiences to UK comedian Richard Ayoade.

You'll have to listen to the podcast to hear what Pat and I thought of The Watch, but I will say that I found Ayoade's performance to be one of the film's strengths.

Ayoade has already had a pretty diverse career and the release of The Watch gives me an excuse to write up some of my favorite efforts of the actor/writer/director.


These works are not organized chronologically, but instead grouped by stylistic similarities.

The IT Crowd (2006-2011)
Most people who are aware of Ayoade in the states know him from his acting role on the successful UK sitcom The IT Crowd.
For those who liked Ayoade’s character in The Watch and want to see more of him in that type of role, The IT Crowd is a decent starting point.  The show, created by Grant Lineman (Father Ted, Black Books), features Ayoade and recent US-breakout Chris O’Dowd (Bridesmaids) as Information Technology employees in a cartoonish work environment.

Like The Watch -and unlike the rest of the list- Ayoade’s sole creative input to the series was as an actor.  Like in The Watch, he  plays the role of a socially inept outsider to great comcial effect.  The show ran for four six-episode seasons on Channel 4 (which, unlike the BBC, is a for-profit television network).  Rumors persist that a fifth series or one-off special will be made in the near future, but with O’Dowd and (possibly) Ayoade’s newfound success, the odds of that happening have slimmed.

Ayoade reprised his role in NBC’s US version pilot with Joel McHale playing O’Dowd’s role. While that version never made it to air, it did leaked on the Internet recently.  Much like the US pilot for The Office, it’s more-or-less a remake of the first episode of the UK show.  It’s odd.


The IT Crowd (US Pilot) by FreakStyler


Ayoade later directed McHale in the season 2 Community episode “Critical Film Studies.”  For fans of the show, that was the one that riffed on both My Dinner With Andre and Pulp Fiction.
Playing with genre and film parody is a strength of Ayoade’s which will become very apparent in the next section...


Before he became a UK celebrity, Ayoade co-wrote, co-created and directed the six episode series Garth Marnghi’s Darkplace.  This show became my first exposure to Ayoade when it aired late at night on the Sci-Fi Channel.  It would later gather a somewhat larger following when Cartoon Network added it briefly to its Adult Swim line-up.  I will admit, when I first caught Darkplace, completely unaware of what it was, it took me a good couple of minutes to “get the joke.”  Once the opening credits started, however, I was hooked.


Ayoade plays Dean Learner, the publisher of popular horror writer/dreamweaver/visionary Garth Marenghi (co-writer Matt Holness).  Learner was also the producer for Marenghi’s short-lived paranormal hospital program "Garth Marenghi’s Darkplace", which was shelved because it was too radical, too risky, too dangerous, and too gosh-darn crazy.  The so-called powers-that-be were scared to show it.   Learner was also coaxed into co-starring in the series, despite not being an actor.  Its a good thing Marenghi didn't want him to put on an act...he wanted him to put on the truth.

The show hilariously plays with the conventions of cheap 80s television (poor framing, lame special effects) and is a must-watch for fans of genre spoofs.  Unfortunately, it has never been released on DVD in the US, but the entire series (and extras) can be found on YouTube.

Man to Man With Dean Learner, the show’s 2006 spin-off, had Ayoade reprising his role with the format changed to a mock interview show.  Matt Holness plays a different interview guest each episode (including Marenghi in the first installment).  The show, which has yet to be officially shown/released in the states (but again-YouTube), has a number of great jokes, but suffers from a distracting laugh track/live audience.

Ayoade played with the poor production values of another genre when he directed and co-wrote AD/BC: A Rock Opera.  The parody of Christian-themed 70s rock musicals like Jesus Christ Superstar and Godspell aired as a Christmas special on BBC Three in 2004.  Matt Berry (who co-wrote the script and music with Ayoade) played the show’s creator and "The Innkeeper" from the Christmas story and Ayoade played "Joseph Christ."  The joke (poor production values and wayyyy too many high notes) wears thin over the half hour run-time, but if you’re familiar with the musicals it’s parodying, its worth a watch on YouTube or Vudu --since it hasn’t been made available yada yada.

I absolutely love Ayoade’s feature film writer/director debut Submarine.  It was my #3 film of last year (yeah, it debuted at Toronto in 2010 but its UK and US theatrical releases were in 2011).  Ayoade does not appear on-screen in the coming-of-age story of a boy (Craig Roberts) falling in love for the first time while his parents (Sally Hawkins, Noah Taylor) drift apart. The film shows that the guy may be at his best behind the camera:
I wish I could come up with a more unique adjective than quirky and make comparisons less on-the-nose than Wes Anderson or Hal Ashby...but I can’t.  And those are appropriate anyway.  When I first saw Submarine, I actually didn’t know that Ayoade the director was the actor I had seen in the other two shows...it was my wake up call to realize “this is all the same guy?!?”  The stylish, hyperkinetic style has more in common with Ayoade’s music video work with The Arctic Monkeys and Yeah Yeah Yeahs than his genre pastiches.
His videos for Vampire Weekend, for example, share a very similar sensibility with Submarine (also"Cape Cod Kwassa Kwassa" does visually reference An American Werewolf in London near the end).


Submarine is available on DVD/Blu-Ray and has also been on Netflix Instant. Ayoade is currently working on a follow-up film, The Double, a comedy starring Jesse Eisenberg that sounds very promising from its IMDB description:
A comedy centered on a man who is driven insane by the appearance of his doppleganger.

I’m very curious to see where Ayoade’s career goes from here as well as catch up on other projects (The Mighty Boosh, Nathan Barley) he’s been a part of.  Even if The Watch doesn't force America to catch Ayoade Fever (which is treatable), I'm sure he'll eventually find the success his talent deserves.