IN APPRECIATION: Fat Man on Batman 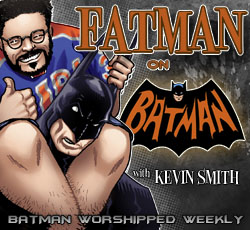 When a website/blog’s purpose for existence is to accompany the podcast of its content providers, its probably not the smartest idea to make one of the first posts about another podcast. Still, I’ve found myself recently infatuated with Kevin Smith’s newest podcasting project, Fat Man on Batman..

Smith doesn’t need my help pushing his product. The retiring filmmaker has dedicated a lot of current energy into his Smodcast Network, overseeing more than thirty different podcasts. This endeavor has become so successful that it has led Smith to step away from directing films after his upcoming hockey film Hit Somebody.

I used to listen regularly to the flagship Smodcast (which consisted of Smith and producer Scott Mosier shooting the breeze for an hour plus), but my interest waned around the time Smith started to backlash against film critics after the cool reception to his (crappy) film Cop Out. I still listen to the Smod programs where the focus was on other individuals, like the Jon Lovitz-featuring ABCs of SNL.

Maybe its a little bit of The Dark Knight Rises anticipation coloring my goodwill, but Fat Man on Batman has become my current must-listen podcast (other than the infant FWOAC, of course). As a child of the 90s, my favorite cartoon to watch after a long school day was Fox’s Batman: The Animated Series. Darker and more story-driven than any other American cartoon show aired to that point, B:TAS is still the definitive version of Batman and his related characters. The show was so influential that the comics even started to incorporate ideas and characterizations from its animated adaptation: Mr Freeze's origin, one of the most tragic super villain stories ever, was taken from the classic episode Heart of Ice and The Joker's moll Harley Quinn was a character created for the show. I now own the entire series on DVD and whenever I pop in one of the early episodes, I'm amazed at how much almost every line has stayed with me (Fox used to re-air those early episodes a lot. A. Lot.)

So far each episode of FonB has featured a different person responsible for the show, starting with series writer Paul Dini and following that up with a two-part interview with Smith-proclaimed “People’s Joker” Mark Hamill. The Hamill interview is what won me over. The man is so passionate about his career and his interests and his affection for the people he has worked with is infectious.


Batman and The Joker are barely mentioned in the first half (90 minutes!) of the interview and instead we get to hear honest stories of being a working (voice) actor. When the show turns to how Hamill began to develop the Joker voice, its a testament to his talent as an actor. Hamill is an energetic storyteller and while he may not always stay focused, the destination is always worth the journey. There’s a touching moment that occurs in the second half where Hamill gets to meet the Batman of his childhood, Adam West, that got me choked up while driving to the supermarket. Smith jokes at the end of the podcast about how Hamill needs to get his own show--I'd be willing to be a paid subscriber.


Even if you are not a reader of comic books, if you are or ever were a fan of Batman: The Animated Series, Fat Man on Batman is definitely worth the (no) cost it takes to download.

Episodes can be found on iTunes and here:


A new episode featuring Batgirl voice actor Tara Strong (who also has a voice cameo in next week’s FWOAC featured movie Ted) has just been posted. I can’t wait to listen.