The 9 GREAT Seconds of Superman III 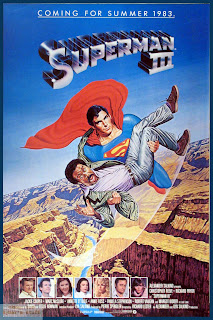 1983's Superman III has a pretty poor reputation. This is primarily due to the fact that it is bloody god-awful.

As comedian Paul Scheer described it: "Superman III plays like a Richard Pryor movie where Superman plays a supporting role!"

Despite the tagline's promise that "This Time Will Be The Best Time Of All," the Richard Lester's second Superman film is cartoonish, unfunny, logic-defying, and -worse of all- excruciatingly long.

If you haven't seen the movie, I definitely don't recommend it. If you choose not to heed this warning, this trailer should give you an idea of what you'd be getting yourself into:
There's a higher quality version here:
http://www.youtube.com/watch?v=wu6uNk0mauM

There are some things in Superman III that are good: Christopher Reeve committed to his role as Clark/Superman as much as he had in the previous movies and, despite some of the sillier moments, he's always winning as the definitive cinematic Superman.  Also, many of the scenes in Smallville with Annette O'Toole as Lana Lang are charming.


These are, however, merely the silver linings of a turd cloud.

So now that I've established that the film isn't very good, you may think that when I promise 9 great seconds, you may think I'm being sarcastic or snarky.  I feel like I have buried the lead far enough in this post and will now present the clip:


Anyway, when watching this very brief section of the movie, I was impressed by the amount of creativity, iconography, and cinematic history that was crammed into such a short amount of time.   The setting: the American Heartland. As Clark runs between the posts in the fence, he transforms into Superman and then flies off.   The special effects are quite excellent and the dissolve effect is covered well by the fencing.  The fence is what makes the scene: as Clark runs and the camera follows, the effect is similar to the early animation/cinema mechanism the zoetrope.  The zoetrope turned static images into moving pictures and this fence facilitates the metamorphosis of actor Reeve into the cultural icon Superman, a character born of the still images of the comic book page.  It is the border between belief and disbelief.

Do I actually believe that any of this is intentional on director Richard Lester's part?  Not really.  The rest of the film is too ineptly made to justify my interpretation as being anything more than "incidental art." Removed from the clowning that the 7490 other seconds in the movie consists of, however, and I think the featured Superman III clip can be viewed as a work on how icons are brought to life through the power of cinema.