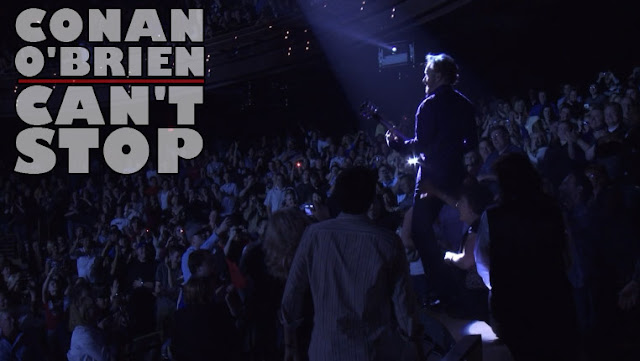 It was either 7th or 8th grade when I first tuned in to Late Night with Conan O'Brien. I don't remember why I was up so late, but I do remember laughing so hard I couldn't go to sleep. I was instantly a die hard fan, videotaping every comedy segment, tons of band performances, and choice interviews. If you go digging through my box of VHS tapes you'll find hours of pimp-bot skits, Bill Clinton, Arnold Schwarzenegger, Bob Dole, Michael Jackson and others being interviewed via green screen lips, Conan interviewing "Rocket Guy," a man who was building a space rocket in his backyard (the funniest interview I have seen in my life), and so much more.  Friends still remind me of how I called them at midnight to turn on Conan because he and Al Roker were playing over and over that clip where a zoo keeper has an elephant sit on his head.  Needless to say, I was in love with Conan O'Brien.

Fast forward to 2012 and I've been a fan of Conan O'Brien's for over half of my life and last summer I finally got a chance to take in a taping of his show, currently "Conan" on TBS. There was something about the experience that felt... inorganic,  rehearsed and safe. Conan wasn't very lively or "in the moment." There were no characters or out-right zaniness, I almost felt a little cheated.

After watching Conan O'Brien Can't Stop I finally feel like that taping was explained. Here's the trailer:

Conan O'Brien Can't Stop is almost a character study of a man who has been publicly humiliated and from that, feels the need to make up for wrongs he never committed. This film is 90 minutes of Conan red-lining his comedic talents, round the clock for 40 days straight. At times he comes off as a prima donna, but in reality the audience forgives him because he doesn't know how to shut it down. Something happened to Conan during his time at The Tonight Show that knocked him off his foundation. He seems so uneasy with himself and what happened to him at NBC that his reaction is to do anything and everything to stay relevant, even though that isn't an issue; he's on a sold-out comedy tour.

Can't Stop is a great concert film/documentary. It's not a love letter hiding all the warts of everyone's favorite floppy-haired late night host, there are points where he is just obnoxious. I never got to see the Legally Banned From Being Funny on Television Tour, and while I regret that, this film might be better than actually seeing Conan live. Conan is obviously playing to the camera throughout the film, but he's so charged up and the film shows so much of him that you see he will do almost anything to entertain, To our benefit and his detriment, he can't say no.

The good news is Conan has recovered from the NBC/Leno fiasco, for the most part. He's starting to regain that energy where he turns into a cartoon. He's not just telling pop culture jokes, he's doing things like running around Manhattan delivering Chinese.

Beyond the unfair force-out that the film drives home, Conan O'Brien shows how much work it takes to pull off a cross country tour like this and how much comedians give and feel the necessity to keep giving. Conan O'Brien Can't Stop is currently streaming on Netflix and available for purchase on Amazon.